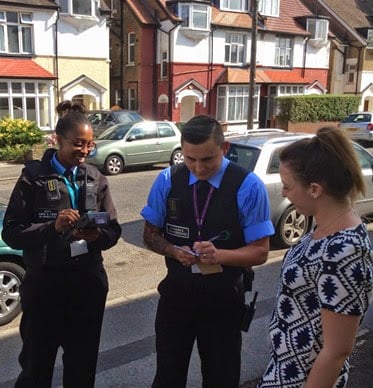 We have recently received some very positive feedback from a member of staff at the Debenhams store at Centre Court Shopping Centre in Wimbledon regarding the conduct of two of our Environmental Protection officers, Garry Smith and Rommelle Cotterell.

The member of staff wrote to us to say that he, one of his colleagues and a security guard from Centre Court Shopping Centre were attempting to detain a shoplifter who had stolen over £500 of cosmetics from the Debenhams store, and that “this shoplifter was unwilling to cooperate and refused to return to the store as she did not wish to be detained by three males. She became very vocal and evaded us eventually running into Wimbledon High Street”.

Kingdom provides Environmental Protection services to Merton Council, with the priority being to tackle street litter in the London borough. This involves issuing fixed penalty notices (FPNs) to offenders who are seen breaking the Environmental Protection Act 1990s in streets, parks and open spaces, with the aim being to make the borough cleaner, safer and greener, and to reduce anti-social behaviour.

The two Kingdom officers were patrolling the High Street carrying out this role when the lady in question ran out. The email from the member of staff at Debenhams explains what happened next:

“Your officer, Garry Smith, immediately came to assist us with the lady and as soon as he understood her refusal to co-operate managed to get his female colleague Rommelle to assist us in an attempt to calm the lady down.

“Both were extremely professional and helpful in attempting to defuse the situation despite the lady becoming increasingly difficult. After the police arrived we were informed this lady was in a unwell mental state and was in fact later sectioned.

“At one point the lady attempted to flee in front of traffic and Garry & Rommelle were key in ensuring her safety. Please pass on my thanks to them. Two fantastic employees.”

Due to their high level of visibility within communities, Kingdom’s Environmental Protection officers are often called on to help with situations that are completely separate from their role keeping our street and public places clean. They are led by experts with an ex-police and military background.

Kingdom’s officers aim to be vigilant and discreet to strike the right public service balance. They deliver over 130,000 Environmental Protection hours per annum on behalf of Local Authorities across the UK. It has been estimated that the annual cost of cleaning the UK’s streets is £780million.

Kingdom is delighted to be providing Environmental Protection services in Barnsley for the next 12...